Imbabura, the music capital of the Andes

Andean music , is the traditional folk music heard throughout Cordillera of the Andes. To hear some local groups, you must go to the San Juan festival, held in the Imbabura area on the 24th of June each year.

The music and cultural heritage of Ecuador

It's impossible to imagine a festival in the Andes without the music that goes with it. Over the centuries, this music has become a part of Ecuador's cultural heritage. With Spanish influences on the strings (guitar, harp, charango and violin) and Andean influences on the woodwind (zampoyas, flutes , pan pipes etc.) music traverses all of the Cordillera of the Andes, from Bolivia, via Peru, to Ecuador. Accompanied by percussion instruments, such as maracas, and Quechua songs, it retraces the history of the Andes, paying hommage to the Sacred Earth, the Condor and the Sun. Other, more melancholy traditional songs honour friends, lost lovers and the memories of cherished souls. It resounds around the local feast days, the carnivals of Otalo, Ibarra and Peguche for example and is often accompanied by folk dancing.

Exchanges between different countries along the Andes chain have enriched this wonderful music. Inspired by great groups such as the Kjarkas, who are the only group officially allowed to distribute music in Europe, local groups are multiplying. You'll no doubt hear their melodies played by groups in the Imbabura province and recognise other groups such as "Bolivia Manta" or "Los trencitos de los Andes", who have also participated in the development of traditional Andean music. 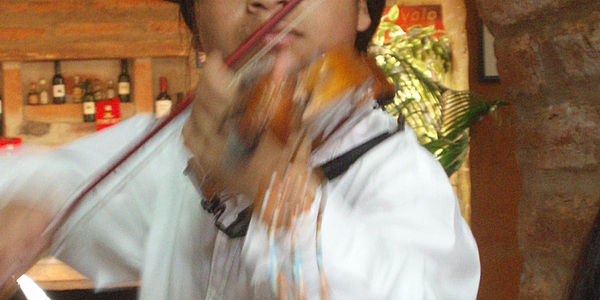 Peguche, a trip worth taking

During the festival of San Juan, held in thelittle village of Peguche, you can join in the evening rounds of the musicians, who tour the patios of the houses with the resounding sound of their instruments. The traditional festival gives you an opportunity to see traditional costumes (devil masks, cow-hide ponchos, bells worn on the feet etc) and to dance to the rhythm of the music of San Juanitos, tapping the ground with your "zapatos". Well known throughout the Imbabura region, this festive music, often accompanied by women singing, is played casually but enthusiastically to herald the start of summer.

The local artisans in Peguche still make cane and bamboo flutes in their little workshops. The raw material used to make them comes from the Ecuador coast. "Quena" vary in size and the wider the tube, the deeper the sound that it makes. The canes are dried, making them very hard, so they have to be cut by a machine and then six holes are made for the fingers and one for the thumb. These flutes are artisan made with a personal touch, giving each musician their very own sound, unique to the Imbabura province. You can visit the artisans' workshops, which are always open to anyone who is interested!

©
Alexandra Maillet
Cuyabeno, the jewel of the Amazon in Ecuador
More articles