Buzet, sitting high on the summit of a hill, is a pretty little Croatian town of almost 6,000 inhabitants. Not only will you find many interesting things to see and plenty to satisfy your appetite here, it's also the ideal place from which to explore the neighbouring villages, go for walks in the woods and forests, and enjoy a spot of truffle hunting!

The best way to get to Buzet is by using your own vehicle: public transport is not very well developed here, and you'll undoubtedly want to explore the neighbouring villages and go walking in the woods and forests. In fact, with Buzet considered Istria's truffle capital, the woods and forests are really this little town's main attraction. The white truffle, in particular, grows in abundance in here and can be found on sale at the local markets from October to January.

You may also get the chance to attend the Subotina festival when visiting Buzet. This is held in the second week in September and involves local people parading through the streets wearing traditional dress, with all participants also getting to share a giant truffle omelette to celebrate the opening of the truffle season. If you happen to be in Buzet at other times of year, you can visit tthe regional museum, stroll around the village's pretty streets, explore its lovely churches and ancient houses, and treat your taste buds by sampling the white truffles at the restaurants and the various shops, which all sell them!

The area around Buzet: hills and forests

After first visiting the tourist office to get information about the local area, or contacting one of the local trip operators (there are several in Buzet and the wider region), you'll be ready to head off along the various tracks that lead up and down the surrounding hills (from where you can admire the local landscapes and scenery), visit charming neighbouring villages, and go walking in the forest, in search of truffles! For the latter, you'll need to know a few basics about finding and picking them, or be in the company of a good guide. 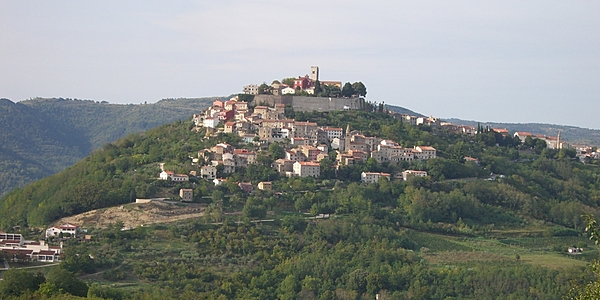 Whatever you choose to do, I do recommend touring from village to village around Buzet; and I especially recommend stopping off at both Roč, which lies five kilometres from Buzet, and afterwards Hum. To reach the latter, you take a narrow road known as the Glagolitic Alley, which leads south from Roč and commemorates the invention of the Glagolitic alphabet by the monks Cyril and Methodius. Within Roč's 15th century town walls lie the remains of a number of buildings ranging in epoch from the Roman to the Renaissance, and there are beautiful views of the surrounding hills to be had from the town. Hum is a charming little village containing a remarkable church and where, again, the emphasis is on great food … food lovers take note!

©
dfanton
On the Brijuni Islands, in the company of Tito!
More articles