Design your perfect summer vacation in Uzbekistan with a local expert
Customize a tour idea created by one of our local agents based in the destination.
©
Shutterstock

Is Uzbekistan the right destination for you?

Reviews from our travelers about their trip to Uzbekistan

Other than what I described above, the love, affection and kindness shown by locals was simply amazing. Despite the language barrier, one could easily guess the sincerit, honesty and love they have for us.

The trip was chosen by reading the Lonely Planet and the description of the travels in different forum in internet. Bukhara and Khiva were the most beautiful towns and it was a pleasure to walk in their streets. Sleeping under the stars and in the tend in the desert at Darvaza was fascinating

My husband read about the findings of mathematician in Uzbekistan and wanted to go to see the observatory. We like looking at buildings and from the photos we saw this was the place to see some amazing ones. We are also interested in history so the exploits of Timor and Gengis Khan were known to us and we wanted to see the places for ourselves. The guide was excellent. Said introduced us to many local restaurants and places which made the trip special and personal. We did not feel packaged.

Uzbekistan is an under-the-radar destination in the heart of central Asia. Home to ancient cities and the famous Silk Road, it features medieval mosques and walled cities that sit side by side with Soviet-era architecture. Summer in Uzbekistan is hot, with long hours of daylight to maximise your sightseeing time. Uzbekistan is firmly off-the-beaten-track and promises a fascinating vacation to remember.

Why should I visit Uzbekistan in summer?

The climate is the main reason for visiting Uzbekistan in summer. June to September are warm and dry, in contrast to winter which is much colder and often wet. There's lots to see in Uzbekistan, so maximise your time in central Asia's most vibrant and interesting country by booking an English-speaking guide.

Best things to do in Uzbekistan in summer

Uzbekistan is so rich in history and culture that you'll want to pack in as much as possible. With careful planning, you'll be able to see all the main sights, whether your interests are historic, cultural or artistic. Spend some time in the major cities, but leave time to see the rural landscapes too. Here are the top things to do in Uzbekistan.

See the past at Shah-i-Zinda

Cool off on hot Uzbek summer afternoons at the mausoleum complex of Shah-i-Zinda. The shaded rooms around the shrine make for a cool retreat from the sun, each tiled so delicately they are considered the best in the Islamic world. The sunsets here are spectacular, so it's worth timing your visit accordingly.

See the crossroads of culture in Samarkand

Samarkand is one of the oldest inhabited citiesin central Asia, and an important stopping point along the historic Silk Road between China and Europe. Don't miss Registan Square, packed with ornate doorways, minarets, and elaborate tiles. It’s here that the east really did meet the west, and this is evidenced in its architecture.

Itchan Kala is the walled center of Khiva and is home to a high concentration of historic monuments and buildings. Climb the watchtower or a minaret and peer through the doors of splendid palaces.

Escape the cities in the Fergana Valley

The Fergana Valley covers a wide area of Uzbekistan and neighbouring countries. It's a place where time seems to have barely passed, as weavers, potters, and wood carvers still work using traditional methods. The valley is the center of the Uzbek wine industry, and you can visit a vineyard for a tasting session.

Stand on the bottom of the Aral Sea

Over the last 50 years, the Aral Sea has shrunk to 10% of its original size. A sobering aspect of the lack of water is the ship graveyard at Muynak, where visitors can stroll around ships, hundreds of miles from water.

Uzbekistan has a continental climate, with hot summers and cool winters. Temperatures in the summer can reach as high as over 100°F, although temperatures around the mid 80s are more typical. Be sure to pack plenty of sunscreen and a wide-brimmed sun hat. 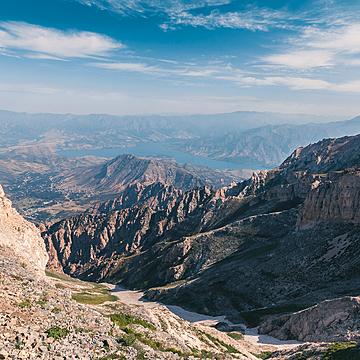 Uzbekistan off the beaten track 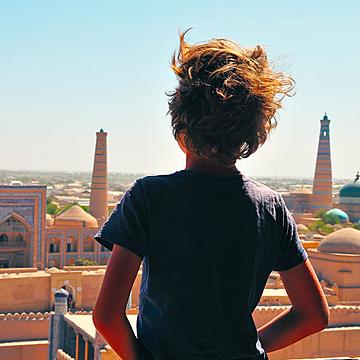 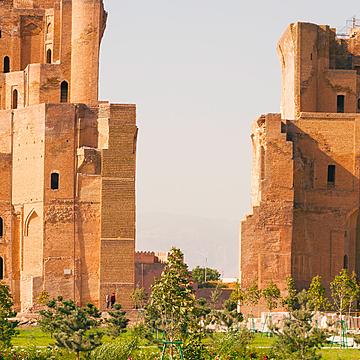 One week in Uzbekistan
Experience added!
You can add more experiences to your trip itinerary before sending it to a local agency
View my trip itinerary