Covid-19Réouverture des frontières :en savoir plus
DestinationsTrip Types About Us
FAQs
Sign into my Evaneos Account
Destinations
Top destinations of the moment in Oceania
Travel to Oceania
Browse our tour ideas by category
See all tour ideas

Design your perfect trip to New Zealand in June with a local expert
Customize a tour idea created by one of our local agents based in the destination.
©
shutterstock

Is New Zealand the right destination for you?

Reviews from our travelers about their trip to New Zealand

We traveled from Auckland south to Queensland and Christchurch via planes, train and cars. We then went to Australia and enjoyed Sydney, Port Douglas and back to the Blue Mountains. It was an amazing trip.

We had such an adventurous trip. My two kids (9 and 6) and my husband and I wanted to get as much out of our 16 day trip as possible and we did. In Queenstown, we travelled to Milford Sound via plane and did a cruise of the fjords. The entire trip was priceless and well worth the money spent. In Queenstown we stayed at The Rees Hotel. It was an amazing place and I highly recommend. While in Queenstown, we also took the gondola up and did the luge, we went jet boating at Shotover Jetboats and enjoyed the city. Queenstown will always be so memorable because the place is gorgeous everywhere and so fun! Other than Queenstown, Mt. Cook stands out because of it’s beauty. We took a helicopter ride on top of the glacier and were just awestruck by the scenery. Finally, Rotorua was an place of great adventure too. We had a blast zip lining, going to the Agrodome, Ogo’ing and doing the Maori Cultural Experience. Rotorua is full of adventure and a top spot on our trip. We ended our trip up north in Oakura Bay and Auckland. The beach was gorgeous and we loved checking out the city. Overall, we had an amazing time as a family of four exploring both the north and South Island of NZ!

We have always wanted to visit New Zealand but we’re unsure about how to plan itinerary so it was brilliant to use a local agency for this purpose and prebook accommodation and activities. It was a very busy itinerary but necessary to see what we wanted to in time available in 2 weeks South Island and one week on North Island.

New Zealand is one of the most untouched, unspoiled, and uncrowded countries on earth. Boasting breathtaking landscapes, numerous pockets of hidden rainforest, and unique wildlife. Owing to its varied topography, the country has some magnificent lakes spread out throughout the nation. Lakes in New Zealand range from the cool, clear waters of the South Island to the enormous lakes of the North Island.

New Zealand’s lakes are among the most spectacular in the world. Most of the lakes are located in striking, mountainous areas with beautiful peaks and picturesque scenery. Some are small but spectacular, while others are huge, with numerous attractions on their shores.

The best lakes in New Zealand to visit

With so many to choose from, we’ve whittled it down to these best lakes in New Zealand.

The vistas around Lake Taupo are marvellous, from the lonely, stone church to snow-capped mountains in the distance. This magnificent lake is world-famous for its trout fishing, so grab a rod and hook your dinner. It also has lots of geothermal activity underground, so hot pools make for great bathing spots. The absolute highlight, though, is Huka Falls, which sits north of the lake on the Waikato River.

Lake Wairarapa is just 30 miles outside Wellington and is the third-largest lake on New Zealand’s North Island. The scenery surrounding the lake comprises farmland and low-lying swamps, and the region is particularly beautiful in autumn when lovely fiery colors come out on the trees and among the grasses.

Lake Te Anau is bordered by the mountains of the Fiordland National Park and is the largest lake on the South Island. Te Anau is also regarded as "the walking capital of the world", so don your boots and get outdoors where you can find divine scenic strolls.

For the ultimate nature tour, visit Lake Matheson, where the water is so still and clear it creates an extraordinary reflection of New Zealand's highest peaks, Mount Tasman and Mount Cook. Formed approximately 14,000 years ago, this lake is a peaceful site, and it’s home to abundant wildlife in its thick forests, easily spotted from the walking trails. This is a nature lover's paradise.

Also known as Blue Lake, Tikitapu is a favorite for water-sports fans and picnickers. You can enjoy the simple walking trails around the water’s edge, sunbathe on the beautiful beaches, or investigate some of the interesting native flora that thrives here.

Plan your visit to New Zealand's lakes according to the seasons. If you want to explore the lakes in warm, dry weather, visit during the summer (December to February). Winter months are best for those who want to get a glimpse of the country’s best lakeside skiing destinations. 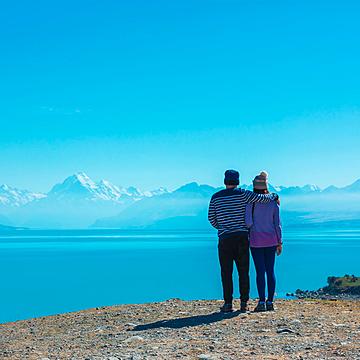 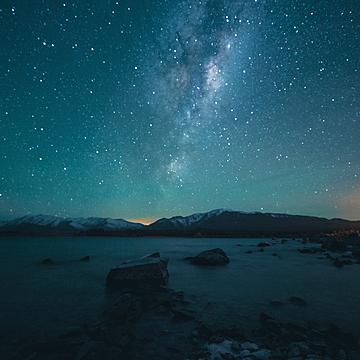 New Zealand off the beaten path 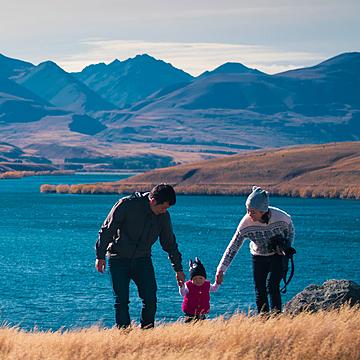 New Zealand family vacations
Experience added!
You can add more experiences to your trip itinerary before sending it to a local agency
View my trip itinerary