Forming the south-west tip of Santorini, Akrotiri is often wrongly cast aside by tourists who don't have time on Santorini.

My suggestion:
If your itinerary in Greece allows, don't hesitate to spend a little time in Akrotiri, which unveils another side of Santorini.
My review

I reached Akrotiri from Fira on a quad bike hired on site to make it easier for me to get around. I only wanted to visit the legendary archaeological ruins, but in the end I stayed at Akrotiri longer as the place held some beautiful surprises.

The old site of Ancient Akrotiri, recently restored, enhances very well this ancient lost city, which was buried following an eruption in the 17th century. The frescoes, numerous ceramics, houses and overall plan of the town are clearly visible.

I also really enjoyed my stop at nearby Red Beach, a beach surrounded by red cliffs. I didn't explore any further, but you can also reach White Beach and Black Beach from Akrotiri.

As the sun went down, I went back to Akrotiri Cape for a memorable sunset, very different from the traditional view of Santorin on the caldera. 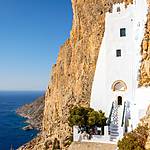 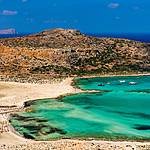 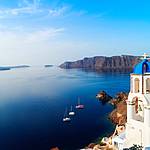