5 / 5 - One review
How to get there
It is 45 minutes by car from Yerevan
When to go
Throughout the year, May to October for the mountain
Minimum stay
One day

The ruin of the Amberd Fortress is 2300 m above sea level; it is a symbolic monument perched on top of a stony setting and at the foot of Mount Aragats. Just next to the Vahramashen church (11th century) is another architectural and scenic gem.

My suggestion:
Prepare your ascent of Mount Aragats from the village of Antarut, go via Amberd Fortress, the Vahramashen church and beautiful Lake Kari. A unique itinerary combining mountains and heritage!
My review

This is one of those incredible sights to which Armenia holds the secret. At the heart of it: a picturesque ruin of a 7th century fortress, perched on top of a rocky peak. It lies at the convergence of two mountain gorges and at the foot of the bare roof of Armenia, the extinct Mount Aragats (4090m). A stony, arid and windswept setting, a mineral architecture encompassing walls of black stone towers which date back to the centuries of fighting.

And that is not all: behind the Amberd fortress, at the end of the rocky headland which overlooks the canyons, the splendid Vahramashen church rises out, which dates back to the 11th century. It stands out just as much for its solitude, as for its simple and austere lines, yet elegant, strong lines which are typically Armenian.

I spent one of my most beautiful days in Armenia, making the discovery of these treasures by foot. From behind, Mount Aragats moon-shaped landscape yielded an irresistible attraction within me and a strong emotion hit me during my ascent to the summit of the Lesser Caucasus. It is as solitary as the church and the fortress ... 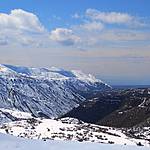 Cañón Azat
See more
Experience added!
You can add more experiences to your trip itinerary before sending it to a local agency
View my trip itinerary