Much less known than Petra or even than Jerash, the Gadara site is still very beautiful and interesting to discover during your trip to Jordan.

Everyone who has been amazed by the site Petra and all those who have enjoyed their visit to Jerash but who still want to see more can go to Gadara. To get to this very beautiful site, you must first reach the village Umm-Qais. To find it on a map, be aware that Umm-Qais is in the north of the country. To get there during your trip to Jordan you should go towards the border with Israel and Syria.

If you're coming from the city Irbid which is around 30 kilometres away, you'll need at least an hour to travel by hopping on one of the several buses or minibuses which connect the two every day. You can also sleep there but if you don't want to, be aware that it's also completely possible to do the return trip in one day, even from the capital Amman. To be honest, it's the best option because there is very little accommodation in Umm-Qais. It's largely preferable to stay in Irbid, Pella or Amman and take a bus in the morning, visit the site in the day and return in the evening. 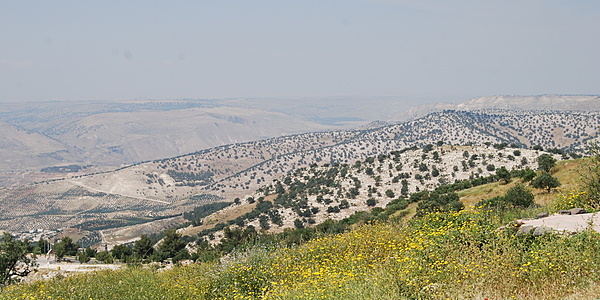 As well as being an ancient city which is exciting to explore, the Gadara archaeological site is located in a superb area. Once on top of the hill you'll have an amazing view over the Jordan valley, the Sea of Galilee and the Yarmouk valley.

What's striking when you first arrive at Gadara is the mix of styles between Ottoman and Roman architecture. You can notice this throughout the whole visit. From the car park you can already admire the small Roman necropolis, the Beit Melkaoui, the tombs of Chaireas, Modestus and Germain, then you'll arrive at the site's museum. Visiting it is a good introduction to what you're going to see after.

Then the northern theatre, the pretty Byzantine basilica, the amazing main street and the impressive western theatre follow. The latter is the best-conserved monument in the whole site. The rest of the visit goes through the Nymphaeum, the thermal baths, the decamanus, the underground mausoleum and the Ottoman village.

You should also not miss taking a break at the little viewpoint. There you'll have a beautiful view over Syria and Israel.