Lycia, between Antalya and Fethiye

This part of the country's south case, stretching to the west of Antalya, was known in ancient times as Lycia. Today it is a well developed and refreshing touristic region, thanks to its mountains and sheltered cedar natural reserves, as well as its many coves dispersed in the bay with blue turquoise waters.

During our journey on the Turkish Mediterranean coast, the bay spreading from Fethiye to Antalya was highly recommended to us. Having been only slightly excited by the large cities, which are too touristic, bordering the Aegean Sea, we were glad to have discovered the charm of Fethiye and its surrounding villages. Furthermore, spring is probably the best time to visit the region, as it can be scorching hot in summer.

First stop-off point: Xanthos (capital of old Lycia) and Letoon (the region's main place of worship) are often associated without doubt because the first administered the other in in the past. Near to Kinik, this dual archaeological site was discovered by an Englishman, Charles Fellow, who brought a large number of relics with him, which are today exhibited in the British Museum.

Fortunately for the tourists that we are, there are enough of them there to satisfy our curiosity, such as the Harpy Tomb, a "double usage" burial cave since it's located at the top of a pillar.

According to Homer, Letoon is named after the nymph Leto, mother of Artemis and Apollo after Zeus' unfaithfulness, who would have been a refugee near its stream, by trying to avoid Hera's anger (Zeus' wife). Kept in the pagan cult in ancient times, UNESCO renovates its temples today (3 of them, dedicated to Leto and her children). Several artefacts discovered on site are exhibited in the Fethiye museum that you can easily visit during the same day. 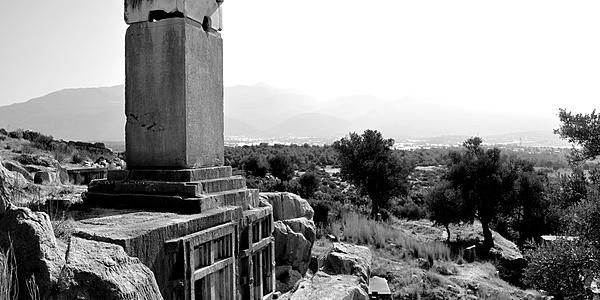 With the arrival of the Byzantine Empire, the capital of Lycia was moved to Myre, a port city located in the north of Demre. Outside the theatre, the main remains of the era were rediscover by flood plains during river floods. The rest of the temples, such as that of Artemis, owe their disappearance to St. Nicolas, bishop of the region (and major inspiration for Father Christmas) who fought against local paganism, progressively neglecting it and then destructing temples. Known for having protected Lycia's inhabitants and saving them from famine, a church in his name was constructed near to Demre. This church has become a place of pilgrimage as well as a touristic monument that has become popular over time. To note, despite everything, its remains have been stolen and transported to Italy, the sarcophagus therefore is empty but the monument remains extremely well kept.

There are many other cities and villages you can visit when you follow in the footsteps of Alexander the Great in Lycia, but it's important to witness the ecological effort deployed in Ölüdeniz (literal transcription: dead mother, because its waters as calm). This seaside resort near Fethiye marks the junction between the Aegean Sea and the Mediterranean. It's also one of the most photographed beaches in Europe.

Raised to the level of a natural reserve, and banned from constructing, its turquoise waters and white sands as well as the neighbouring wildlife make tourists happy. For both diving lovers and novices, Ölüdeniz is an unavoidable location for exploring the seabeds. And if you don't fancy going for an adventure in the sea, you can also go paragliding from Mount Babadağ to admire it from up high!