The spa towns of the north Caucasus

Although foreigners often talk about the political situation in the Caucasus, lots of Russians yearn to go to Stavropol Krai, in the centre of the region, to spend their holidays in the district known as the Caucasian Thermal Water region. Within 40 km the region has a quartet of spa towns which are among southern Russia's major destinations. Pyatigorsk, Kislovodsk, Yessentuki and Dheleznovodsk are linked to the 19th century Romantic era, when the aristocracy holidayed in these prestigious spa towns. Its temperate climate, which is even considered hot by Russian standards, the quality of the water and the elegant surroundings continue to attract a steady stream of visitors to the spa.

With around 150,000 inhabitants, Pyatigorsk is the capital of the special Caucasian Thermal Water region, a tourist and spa region which has a special meaning for Russians. Pyatigorsk is at the heart of Pushkin and Lermontov's Romantic writings, and to Russians means comfort, luxury, relaxation, elegance and high society. Although taking spa water isn't as fashionable as it once was, Pyatigorsk is still an elegant place to stay in the Russian Caucasus and soak up a part of Russian culture that is still largely unkown.

The baths still work, so obviously you can spend your time relaxng and doing not a lot in the local spas . Pyatigorsk is also an ideal base for walking and enjoying the mountains, thanks to Mount Matchouk's cable car and the beautiful mountain slopes around the town.

Amongst the region's attractions, the enormous Thermal Park at Kislovodsk is one of the most popular. It's an elegant, green park, centered around Narzan, a beautiful thermal baths with a big hall full of fountains where you can try different waters. There are often musicians, artists and vendors along the banks of the river. A little further on Kislovodsk park becomes a walk in Caucasian nature, and you can climb the hills, or go up in the cable car, and enjoy the magnificent views over the plains and other mountains. If the weather is good you can see Mount Elbrouz up close: at 5,642 m it is Europe's highest mountain. 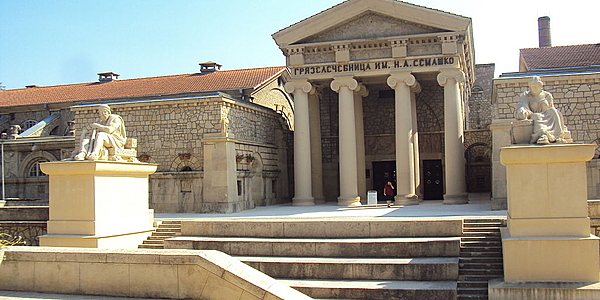 On leaving Pyatigorsk and Kislovodsk, the train will take you to the two other spas which make up the Causcasian Thermal Water Region. Sleepy and calm, a place where you want to laze - Yessentuki has that mysterious "cachet" you often find in spa towns. There are several places that offer thermal treatments, such as the famous Semachko baths, the parks make it very green and the mineral water fountains, cafes and restaurants all encourage you to chill.

Zheleznovodsk also has baths, tree lined streets, a thermal park and a beautiful mountain, Mount Zheleznaya, which has a magnificent view over the area.