You enter the Siq to the sound of horses' hooves echoing on the cobblestones along the narrow winding pass that is the gateway to the ancient city entrance.

The first morning in Petra: from Siq to the High Place of Sacrifice.

Some advice for travelling along the Siq: take your time and don't be rushed like other visitors. What you'll discover is all the more beautiful. Notice the colour variations in the sandstone, old gullies dug into the rock, and try to find the ancient sculpture of a camel caravan on rocks worn by time. And then, around the bend, it appears, the Treasury, the most famous monument in Petra. The shines its first rays of light across its hellenistic facade. The view is breathtaking, only a taste of other wonders you'll discover during your stay in Petra.

Continue along the path and you'll pass the road of facades. Take the fork to the left to climb the stairs which lead to the High Place of Sacrifice. A steep climb awaits you, but the reward is really worth the effort, the two obelisks marking this area like two totems. Take time to look at the life that unfolds under your feet, then, continue strolling along the trail which leads down to the centre of the ancient city. You'll pass the Lions' Fountain and the Garden Temple. From the path, there are beautiful views of the temples below. Carry on to the Soldier's tomb which is worth exploring and look behind the Triclinium where funeral banquets used to be held. Soak up the atmosphere and touch the millennium rock with your bare hands. Then carry on along the path and stop for a well earned lunch in shade of the large trees, near the ancient palace.

From Al Habis to the royal tombs.

In the afternoon, go up to Al Habis, where you can see the ancient ruins a Crusader fortress. Along the path, you'll pass the troglodyte house of one of the last inhabitants of Petra. The view of the city from the top is magnificent. Take a moment alone to watch the setting sun move through shades of pink, red, and orange on the great royal tombs in the distance. Before the sun finally sets, go back to the entrance to appreciate these large tombs close up. Don't miss the Silk tomb, as its facade is rippled with pink, white and orange. It could be likened to a giant size painter's pallet, immortalised in the sandstone for eternity. Then, spend the evening at Wadi Musa, enjoy Eastern delights. Don't forget to spend an hour or two in the hammam, a blessing for worn out feet from a days sightseeing. 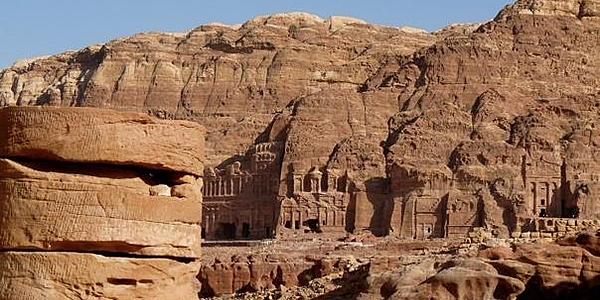 The Monastery at Petra

On the second day, take the same path and enjoy once more the vision of the Treasury. Head for the Monastery, located at the top of 800 steps. The walk is long but the view is unbelievable. The Monastery is similar to the Treasury but much, much bigger. Take a break in the coffee shop opposite the Monastery to sip a Limonana, a drink I discovered during my visit in Jordan and an absolute treat for your taste buds: a lemonade with mint, typical in Jordan. A refreshment stop after a challenging walk, under the scorching desert sun.

Walk for a few minutes to reach a point with the Wadi Araba in sight. At the top, the wind blows and the view stretches as far as Israel in the distance. Going down you can see the Roman ruins, the columned avenue where you can imagine the bustling shopping area, the theatron and its performances, reaching the amphitheatre, the perfect place to watch the sunset.

Then to end your tour, go back along the Siq, taking a last look at the Treasury. The end of a magical moment, at the heart of an ancient city, forgotten for many centuries.