6 reasons to travel to Ethiopia

Ethiopia is a huge country enriched by a history which, according to legend, dates back to the Queen of Sheba era. It boasts many magnificent sites and a welcoming people. There are undoubtedly many more reasons to go there than 6, but here are some which we're sure will convince you to embark on a trip to Ethiopia.

Ethiopia has the whole package. Hot desert regions like that of the Somalis or the desert of Danakil. Mountainous, thriving areas such as Lalibela or the Simien mountains. Flat, green areas such as the Tekezé and blue Nile valleys. Ethiopia also has volcanoes (there are 67 in the country), lakes (around 20), national nature parks (there are 9 of them today, home to many animal and plant species). These regions, climates, geography, and this extremely varied nature and wildlife mean that a visit to just one country still allows you to discover the sublime, changing scenery of an entire continent.

Going beyond the clichés of Africa

We all have our own ideas about Africa: various stereotypes, various things we think we're sure to see when we set off to the continent. We imagine we'll meet friendly, smiling people, dressed in brightly coloured outfits, celebrating, dancing and singing. We expect to eat rice-based dishes with fish and cassava. Wellforget all that, because Ethiopia is different. Traditional costume is white for both men and women, as it is linked to the dominant religion: Orthodox Christianity. The people are friendly, but at first come across as cold and reserved. Plus they eat lentil stew poured over a large, fermented buckwheat pancake, the Injera.

Ethiopian cuisine is wonderful. It's spicy, although not overly so, diverse and surprising. The basic dish consists of a large, fermented buckwheat pancake called the Injera, on which you put lentil puree, meat, fish, vegetables... They all eat from the same dish do so with their fingers. For dessert, there's ripe, sweet fruit: bananas, mangos, avocados, pineapple, lemons...they're often mixed with juice. To finish off, there's nothing better than the world-famous Ethiopian coffee and the ceremony that goes with it.

Ethiopia has a very large number of languages (around a hundred) such as tigrigna, asaan oromo, somali and ’amharique (አማርኛ), the official language. This is a Semitic language with a non-Latin script, the amharic alphasyllabic. It's difficult for Westerners to pronounce, as it uses so-called 'explosive' sounds which don't exist in Latin-based languages. Every region is home to ethnic groups with completely different customs, religions and lifestyles. Ethiopia is one of the only African countries not to have been colonised and its history can be traced back, if you believe the legend, to the Queen of Sheba.

Ethiopia is a developing country, where 30% of the population lives below the poverty line. It is a country largely untouched by the tourism industry, and is largely rural. Although the capital has top-of-the-range infrastructure and equipment, this is of course not the case for the rest of the country. Discovering this great country therefore means discovering yourself. It means being prepared to exceed your limits, to live in occasionally rough conditions, to meet very impoverished people and to encounter the unexpected. In short, it's an adventure!

Rediscover the history of mankind

Ethiopia boasts no fewer than 9 UNESCO world heritage sites: Axum, the low valley of Awash, the low valley of Omo, the churches of Lalibela, Fasil ghebi (in Gondar), the fortified town of Harar, the cultural scenery of the Konso country, Tiya and the Simien National Park. To that list we should add 5 other important sites: the archeological site of Melka Kunture and Bachilt, the cultural site of Dirre Sheik Hussein, the national park of Mount Balé, the natural landscape and culture of the Gedeo Zone and the cultural heritage of Holqa Sof Omar. Travelling to Ethiopia means rediscovering the history of mankind.
Holidays Ethiopia
Loleh Rustenholz
10 contributions 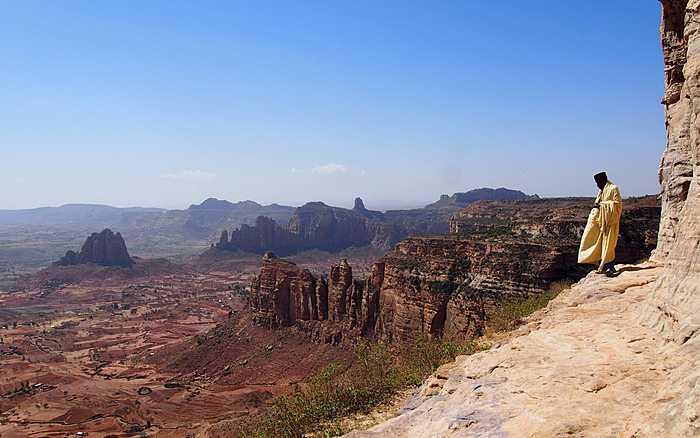