Serengeti National Park and Ngorongoro Conservation Area: the most beautiful parks in the world

The general consensus is that the Maasai Mara National Reserve in Kenya is the park that is the most famous for safaris. However, all the experts will tell you that in order to see the most beautiful parks, you have to plan a trip to Tanzania. The country welcomes fewer tourists than Kenya; and Serengeti National Park and Ngorongoro Conservation Area are a lot more unspoiled.

The goal of a holiday in Tanzania is obviously to go on safari. A greater attraction than the climb to Mount Kilimanjaro even, the country's tourism sector revolves around safaris. And Serengeti National Park is the star attraction.

The vast plains here are so beautiful and so unique that they have been classified by UNESCO as a World Heritage Site. In this gigantic savannah, you will be able to find scenes of animal life that you have already seen in animal documentaries on your television screen. However, here, nature can be admired in her purest and most untouched state.

To make the most of your stay, you should stay as long as possible, but I think a minimum of 3 days is absolutely essential. At Serengeti National Park, in addition to hundreds of animal species, you will have every opportunity of seeing the famous Big 5 (lion, leopard, elephant, buffalo and rhinoceros). The landscape changes throughout the year according to the season. The best time to see the animals is the dry season, from June to November, when the grass is short.

Every year, Serengeti National Park is the scene of large migrations of gnus. The sight is remarkable. Although it begins in February, it is in May and June that it is at its best. 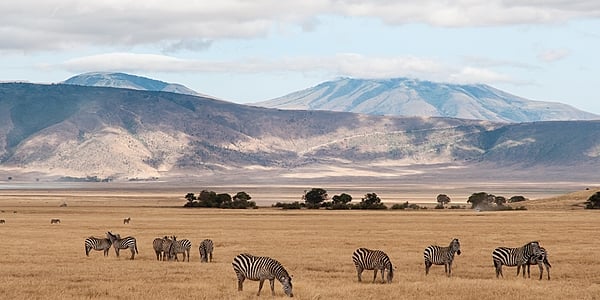 Also classified as a UNESCO World Heritage Site, Ngorongoro Conservation Area is often described as the eighth wonder of the world. At the bottom of this gigantic crater, you can find a real Heaven on earth. The concentration of animals here is the highest in the world and you will never go more than 30 seconds without seeing one. Don't be surprised to learn on arriving that it is forbidden to stay more than 6 hours at the bottom of the crater in order to preserve the unspoiled nature of the place.

All the animals of the savannah are present in this garden of Eden, except for giraffes, which do not manage to descend the walls of the crater. There aren't many elephants and the leopards are rare and make themselves scarce. As Ngorongoro Conservation Area is in the middle of Maasai territory, you should also make the most of the time spent here to go and visit a traditional village.

In the opinion of many travellers, Ngorongoro Conservation Area is the most beautiful place in Tanzania.