The most beautiful beaches of Florianopolis

Florianopolis can be surprising at first. You expect a little island and find yourself faced with a big city and tall buildings. In reality, Ilha Catarina, the island section, is accessible by a bridge.

A choice destination for holidays and relaxation during a trip to Brazil, explore Florianopolis on foot, by bike, by bus or by rental car. There are almost no inhabitants throughout the year but mainly Brazilians and tourists from around the world who come to surf. I recommend staying near the lake, Lagoa da Conceição, in the central part, so you can easily get to other parts of Santa Catarina Island and take advantage of the town's services.

To the east, Barra da Lagoa is the nearest beach to the amenities, and it's probably the most extensive. It's the most famous place to surf. The water is warm and the sea is a little choppy. Still to the east, Joaquina - my favourite - is surrounded by dunes where you can indulge in sandboarding. Surfing on sand isn't easy, but it's very fun. Novices can lie down on the board and slide rather than doing it while standing. The view of the sea is amazing, and sunsets are recommended because you really believe you're in the desert, while the road is right next to you. Praia do Campeche is a long stretch of sand that's very windy, with a choppy sea that is ideal for experienced surfers.

In the pubs of Florianopolis, or in the nightclubs, you’ll be surprised to see stunning young Brazilian women going out with their older "sugar daddies". Experience foro evenings, when you can dance the famous Brazilian samba. The steps are quite difficult... Brazilians have rhythm in their blood and are rather clingy with the girls. They are told that women think "yes" when they say "no" to dancing. Maybe that's why they don't understand very quickly... 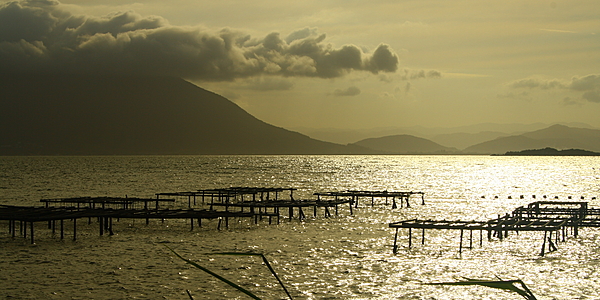 In pursuit of green waters

Contrary to what it looks like, the island is large. Take a week to relax and discover all it has to offer. To go from one end to the other, you'll need a day. The beaches on the south side of the island are known to be more beautiful than those on the north side. Each area depends on a terminal where buses depart. Also, sometimes you have to take three buses to get to a nearby beach. By car, it’s not much better, because the coastal road doesn't go to the tip of the island and some beaches are difficult to access. The advantage is that because of this, they are truly untouched!

Every beach has its own personality. As for the beaches south of Florianopolis, the Atlantic Ocean side, Pantano do Sul, on the shores of a fisherman's village, is more calm because it's surrounded by mountains. As its name suggests, Do Naufragados ("shipwrecks") is worth it: a 2 hour trek leads to this beach at the tip of the island. You can enjoy the best oysters around Baia Sul, directly from the fishermen.

To the north, stay away from Jurerê Internacional (actually with housing subdivisions) and instead opt for Fortaleza São José da Ponta Grossa, a rocky beach just before the untouched Daniela and its boats.

To see the crystal clear green waters lauded by theDepartement of Tourism, check out Ilha do Campeche, the wonderful island where you have to go snorkelling to see the exotic fish. To do this, you have to take the boat to Armação, which is already a beautiful destination in itself, having a wide palette of colours and a strip of sand in the water. On your way back, you might be lucky enough to see dolphins.