On the route between Sao Luis and Fortaleza

It is one of the musts for those who live or are visiting Brazil. The journey between Sao Luis and Fortaleza is one of the region's flagship destinations. I ventured there at the end of the rainy season to avoid the summer heat waves. The journey, which is virtually done exclusively by 4x4, allows you to discover the top tourist locations in Brazil. Although it is physically tiring, this journey remains as one of the most amazing I did in the country.

The trip starts in the city of Sao Luis de Marahao, the capital of the state sharing the same name. Between the bays of São Marcos and São José de Ribamar, the city of Sao Luis is the perfect example of a colonial city. The city wasn't subject to industrial revolution at the beginning of the 20th century and the historic centre has stayed completely preserved. It was classified as a World Heritage Site by UNESCO in 1997. In the evening, in the streets with coloured houses, the inhabitants get together at the sound of a samba and sip on a cachaça. In the mugginess of the evening, that creates a relaxing atmosphere that you don't want to escape. To take the time to relish the city's atmosphere, you will need to spend two or three days there.

But it's time to begin your trip. It takes a little longer than 4 hours in the middle of the dunes to get to the city of Barreirinhas, the main gateway to the Lençóis Maranhenses National Park. The route is slightly dreary but the Lençóis Maranhenses National Park is unmissable during your trip to Brazil. You will need three to days to enjoy the park.

At the border between the states of Maranhao and Piaui, the road heads to Tutoia. The small city on the waterfront has no other site of interest apart from its beaches. The "plage de Amor" - literally "lover's beach" - is by far my favourite. The desert, surrounded by dunes and mango trees of which the roots buried in the ground appear here and there, this place is touched by its simplicity. 120km from there, on the other side of the Delta Rio Parnaiba, there is the city of Parnaiba. If you travel between July and January, in the middle of dunes and mango trees, you might be able to see the migration of red ibis in the sky, with their flamboyant colour, rejoining their nest in the forest. 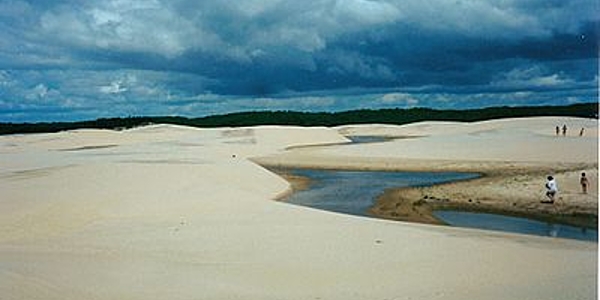 After two days in Parnaiba, I carried on my journey to get to Jijoca de Jericoacoara. A long journey of over 200km which descends slightly inland areas before reaching the city of Camocim. I did the first part of the journey by by bus before taking a boat. During the course of journey, there are numerous small primitive villages with haphazardly constructed houses, surrounded by incredible landscapes. This part of the journey is probably the least frequented by tourists, and is also the part which has remained the most unspoilt. When passing through the villages, such as Chaval, you are far away from the oppressive atmosphere of large Brazilian cities.

Arriving through the beach in Jericoacoara is unforgettable. In the distance, the everlasting famous hammocks in the clear waters, the white sandy beaches and behind the dunes. I spent four days in Jericoacoara then took the bus to Fortaleza. This last leg of the journey is the most simple and is frequented by tourists. You will need to allow 5 hours to reach the large city.