Passing through Huê on your trip to Vietnam you must dedicate one day to navigating the beautiful Perfume River. 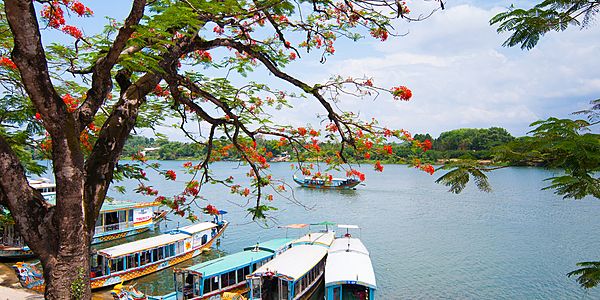 For your arrival in Huê during your trip to Vietnam, it is advised to remain several days here. First of all of course to visit the most beautiful imperial city in the country. Huê is one of the UNESCO world heritage sites and shelters within its walls indescribable treasures such as the Citadelle and its Forbidden Purple City. Excellent examples of the type.

The advantage of the city is also its position on the banks of the Perfume River. A trip on its waters will allow you to discover the imperial tombs. To do this, you'll find amongst the several agencies or hotels in the city one which will offer this trip. You have to make the reservation the night before to be able to embark very early the following morning.

If you don't have too much time, if you're in a real hurry but despite that you don't want to miss this magnificent region at all, you always have the possibility to do the visit by renting the services of a taxi. It's always better than not going there at all but ideally, boats are better. 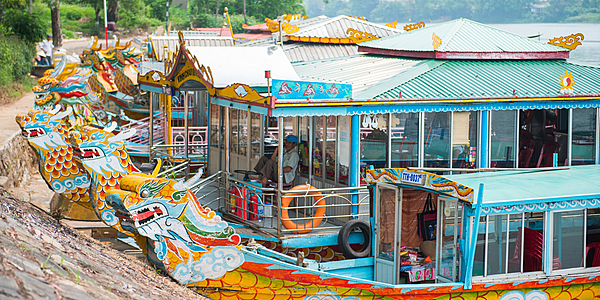 On the water you can do some trips like the Garden House or Hon Chen Temple. You will come across big boats filled with sand. To fill them like this, a man plunges a bucket into the water, rakes the bottom of the river, brings it back up and empties the sand. It's a mammoth task.

The aim of your presence on the river is especially justified by the visit to the emperors' tombs. Though it is highly likely that they don't rest at all in these giant mausoleums. The emperors were buried with their treasure and it's to avoid pillaging that you can't know the exact location of their tombs.

Everything starts with the giant tomb of Minh Mang. He reigned from 1820 to 1840 and was the architect of his own final resting place. This one is absolutely superb. It's the proof that if you want something done right, you have to do it yourself!

In a different style, very kitsch, Kai Dinh's tomb is the most recent since it was finished in 1931. The mausoleum is in the image of what the Emperor was like. A showy structure to the memory of a megalomaniac. Dragon sculptures, bas-relieves, mirrors, grandiose bronze statues, giant mosaics... It's an insanity of grandeur.

A lake, water lilies, big frangipani trees, Tu Duc's tomb is in the middle of a park where nature proclaims its splendour. Without the hoards of tourists, the place could almost be romantic. It's not so sure if the 3000 workers who were killed building it also found the spot so idyllic. Tu Duc was a bloodthirsty emperor who had his brother and family killed. Even after his death, his grave diggers were killed so that they didn't reveal the location of his body and treasure.