Best places to visit in Tanzania

Tanzania is a vast country best known for its safaris, which are among the most spectacular in the world, thanks to its remarkable landscapes and its rich wild fauna. However, let's not forget its Maasai tribes with their many traditions and above all, Kilimanjaro, the roof of Africa. Tanzania is also known for Zanzibar, which justifies its reputation as a tourist paradise.

The capital, Dar es Salaam, is a brief stop for newly arrived travellers. Bustling and unpleasant, it is of no particular interest. On the other hand, the north of the country is the most touristic, in particular the Arusha region. The country's second largest city is located at the foot of Mount Meru and most notably of Kilimanjaro and therefore serves as a base for climbers for whom it will take anywhere from 7 to 10 days to reach the summit. Green coffee plantations are spread out at the foot of the mountain.

Not far from Arusha, is the famous Serengeti National Park (straddling Tanzania and Kenya) known for its plains where you can watch the migration of thousands of wildebeests and plenty of lions. Within this park is the famous Ngorongoro crater, listed as a UNESCO World Heritage Site, as spectacular for its animal safaris as for its scenery. Still in this same region, you can visit the national parks of Tangire and of Lake Manyara.

Continental Tanzania is more difficult to visit, nevertheless you can go on an adventure to discover the huge national parks of Selous and Ruaha, located in the country's centre.

Experienced travellers will venture off the beaten path to the shores of the lakes which mark the country's boundaries: these are the three largest lakes of the continent! Let's start with Lake Victoria, Africa's largest, then we continue the length of Tanganyika, to finally end in the south with Lake Malawi, which marks the boundary with the country of the same name. 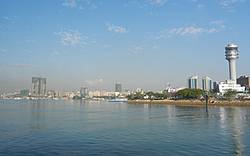 Dar Es Salaam
2.3/5
Dar Es Salaam is the biggest town in Tanzania and East Africa's second largest port. Even so, it's not the country's capital city. It's an interesting place to learn about Tanzanian city life, as well as being the departure point for ferries to Zanzibar.
12