The castle is the main attraction of this little town in southeast Poland, which is associated with key figures in Polish aristocracy.

My suggestion:
Don't worry about the process of paying to get into the castle. You can do it either online or in person at the entrance.
My review

This little village is mainly famous due to its castle. Sometimes also referred to as the Potocki Palace (reflecting the name of the last family to own it), this spectacular Polish castle was constructed in the 17th century. It was only a century later that both the castle and its grounds were opened to the public. In the park within the grounds, there is also a small, romantically styled castle, a collection of chariots and a guesthouse to be found.

Although the palace is the main attraction, don't make the same mistake most visitors do: allow yourself at least half a day for the visit to give you time to see the other buildings and monuments too. My favourite of these is the Synagogue, which seems almost to want to deliberately mislead visitors. From the outside it's just an ordinary and not particularly interesting building, but inside there is a large amount of perfectly restored polychrome stucco decoration as well as some wonderfully elaborate panels and woodwork. It's on a par with the synagogue in Budapest in my opinion.

In summary, this is a place to visit with a difference and one where you can easily spend the best part of a weekend. 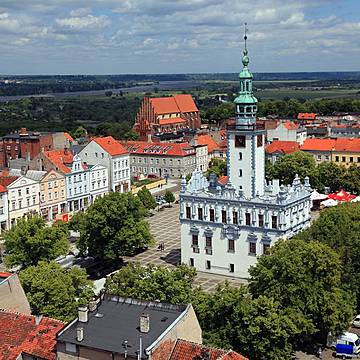