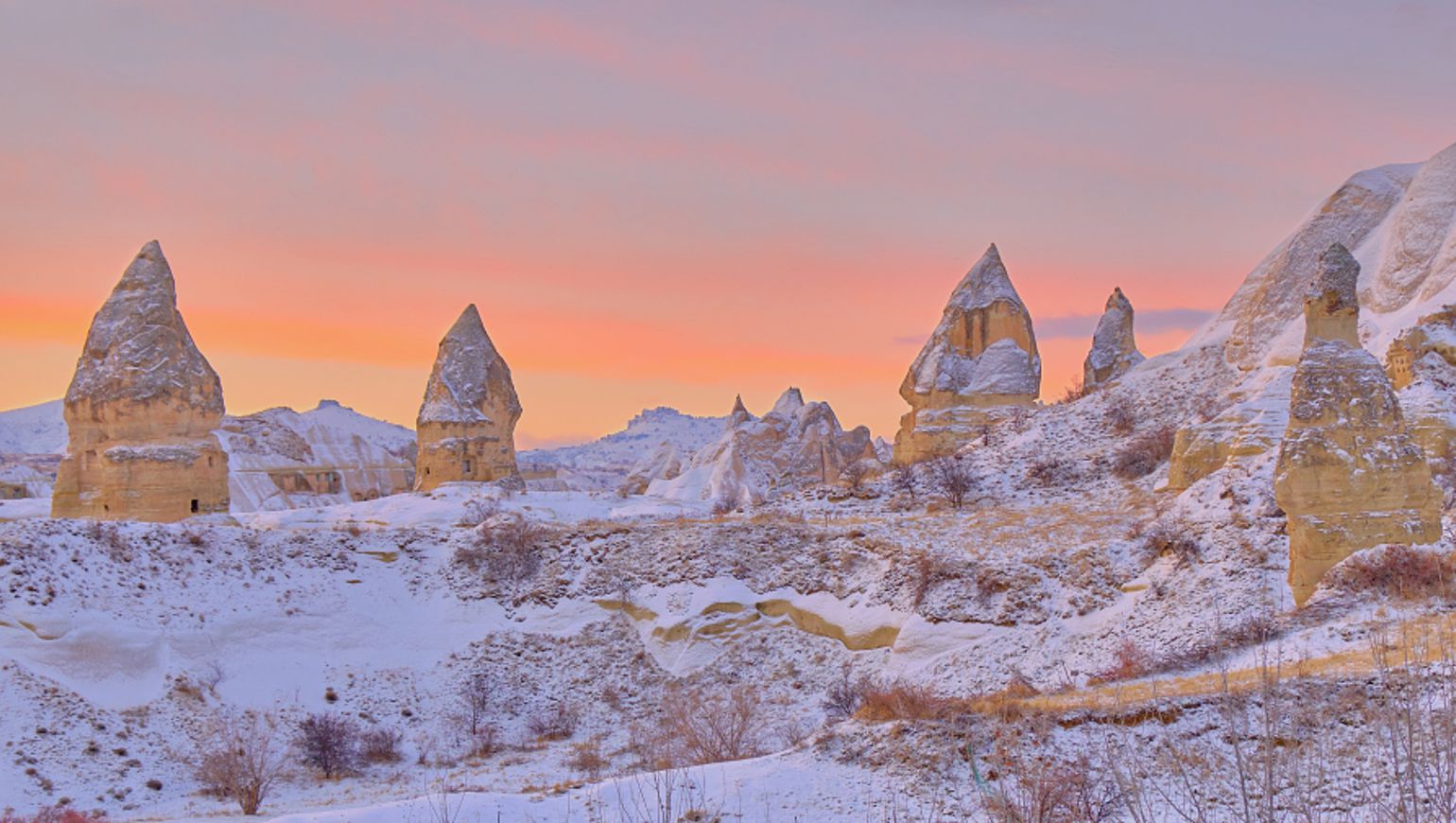 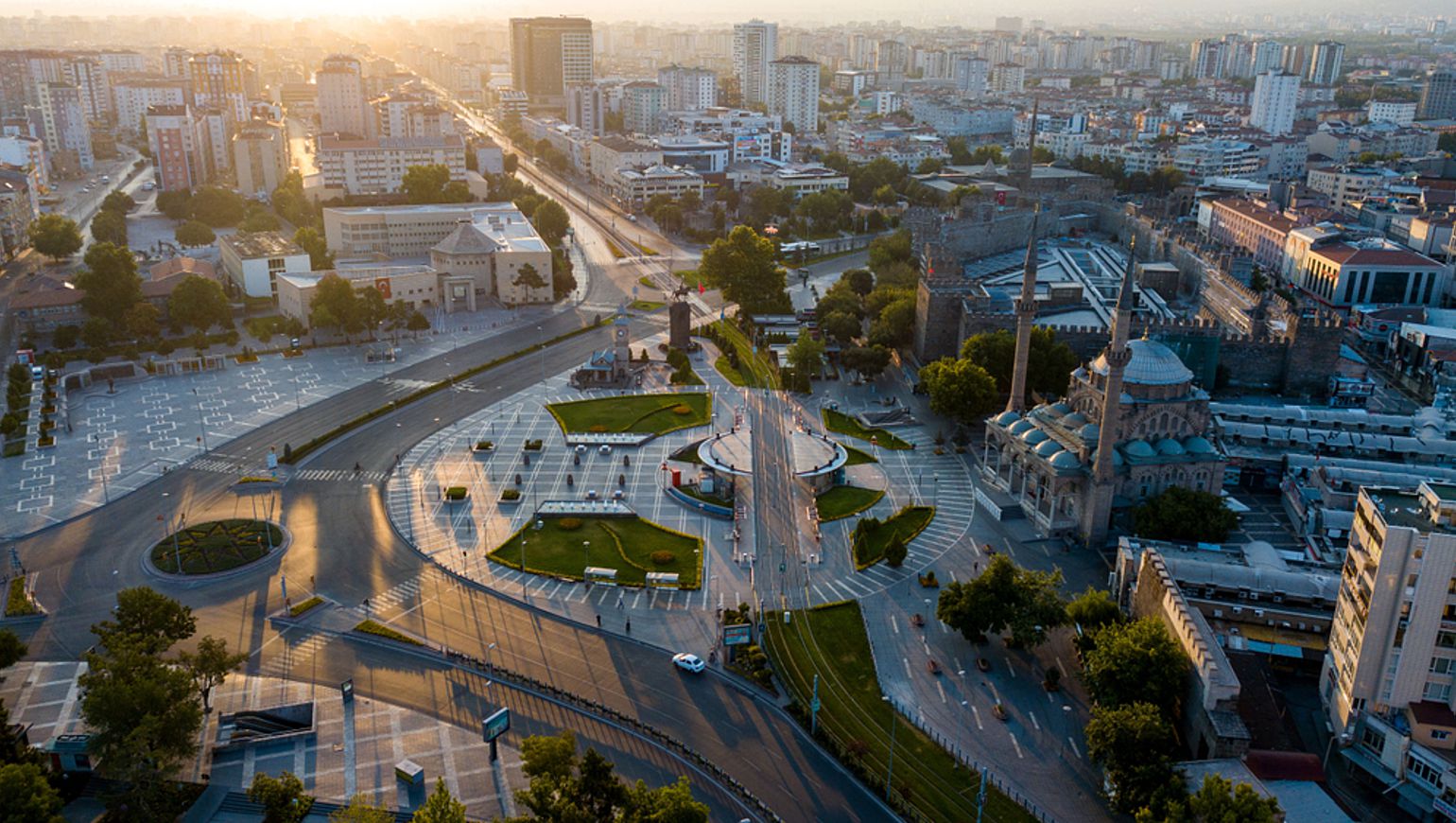 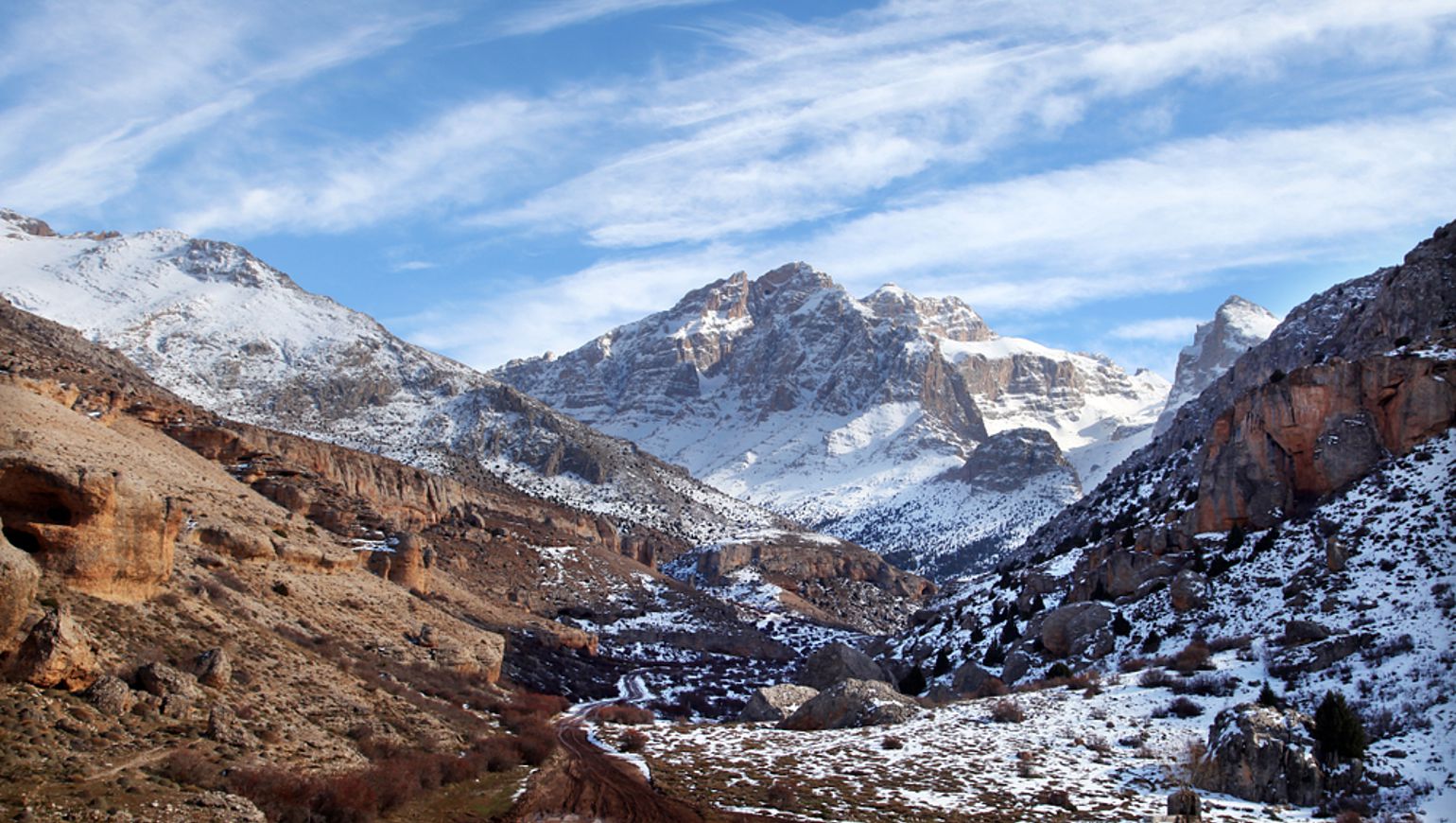 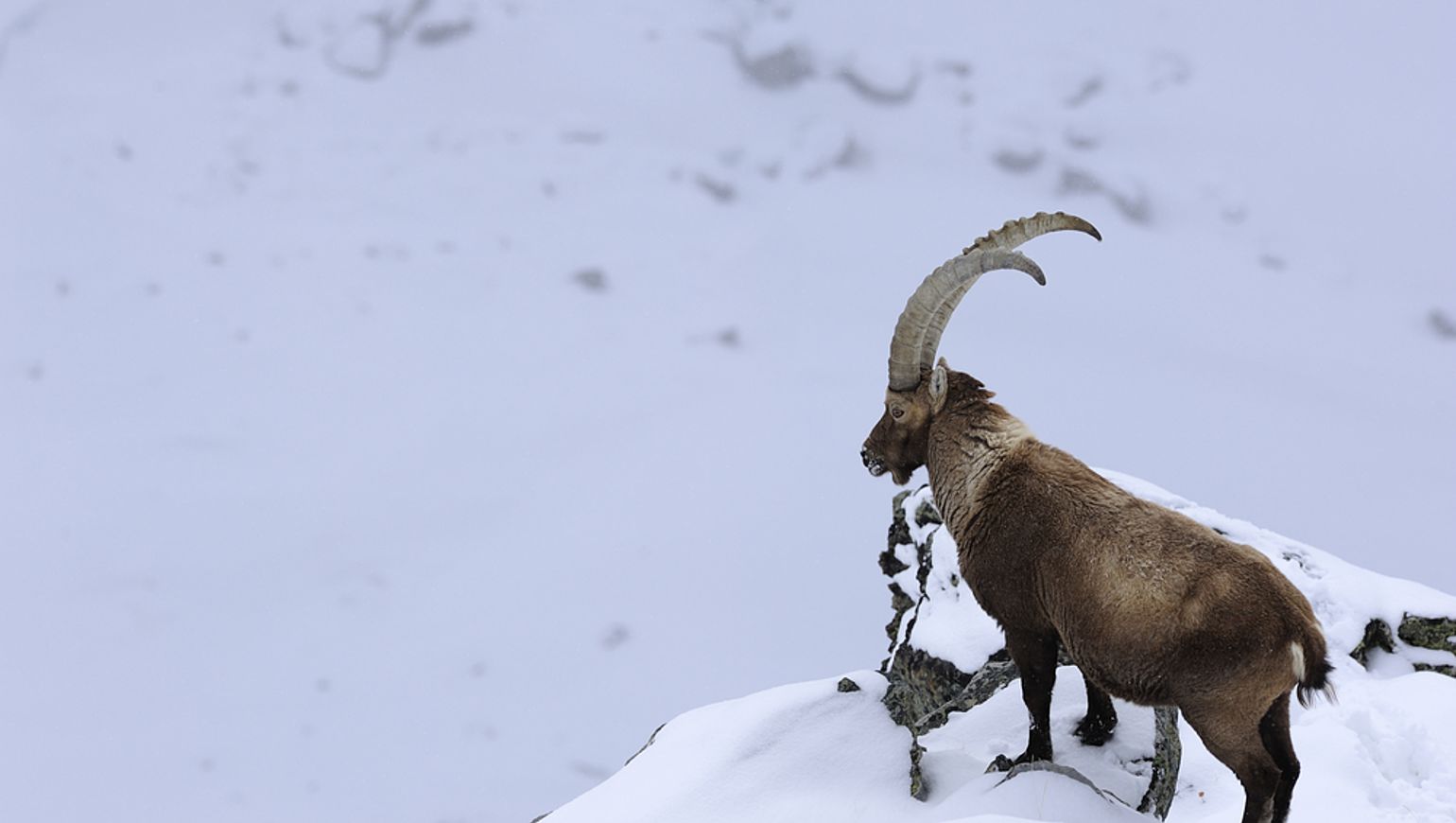 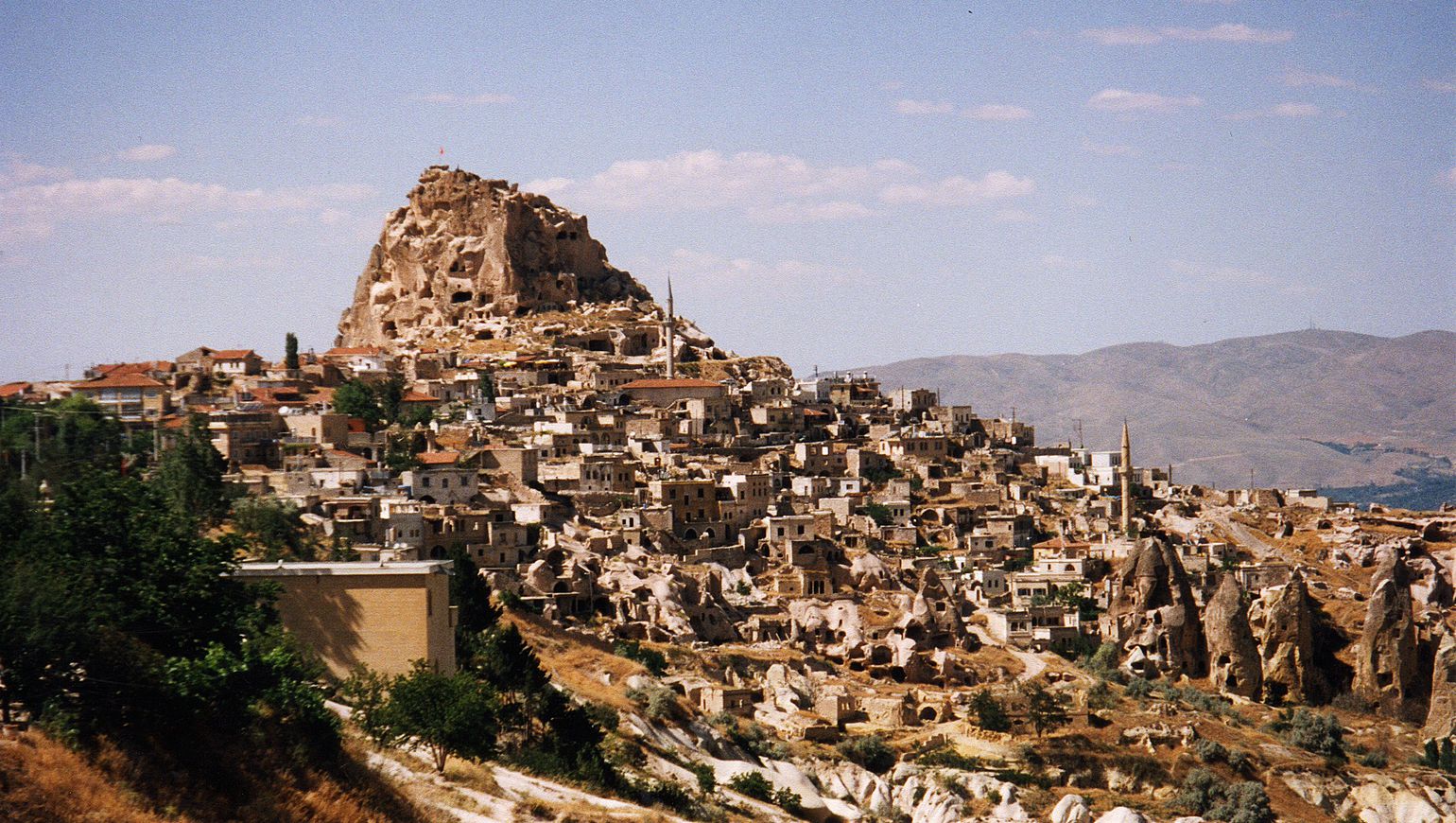 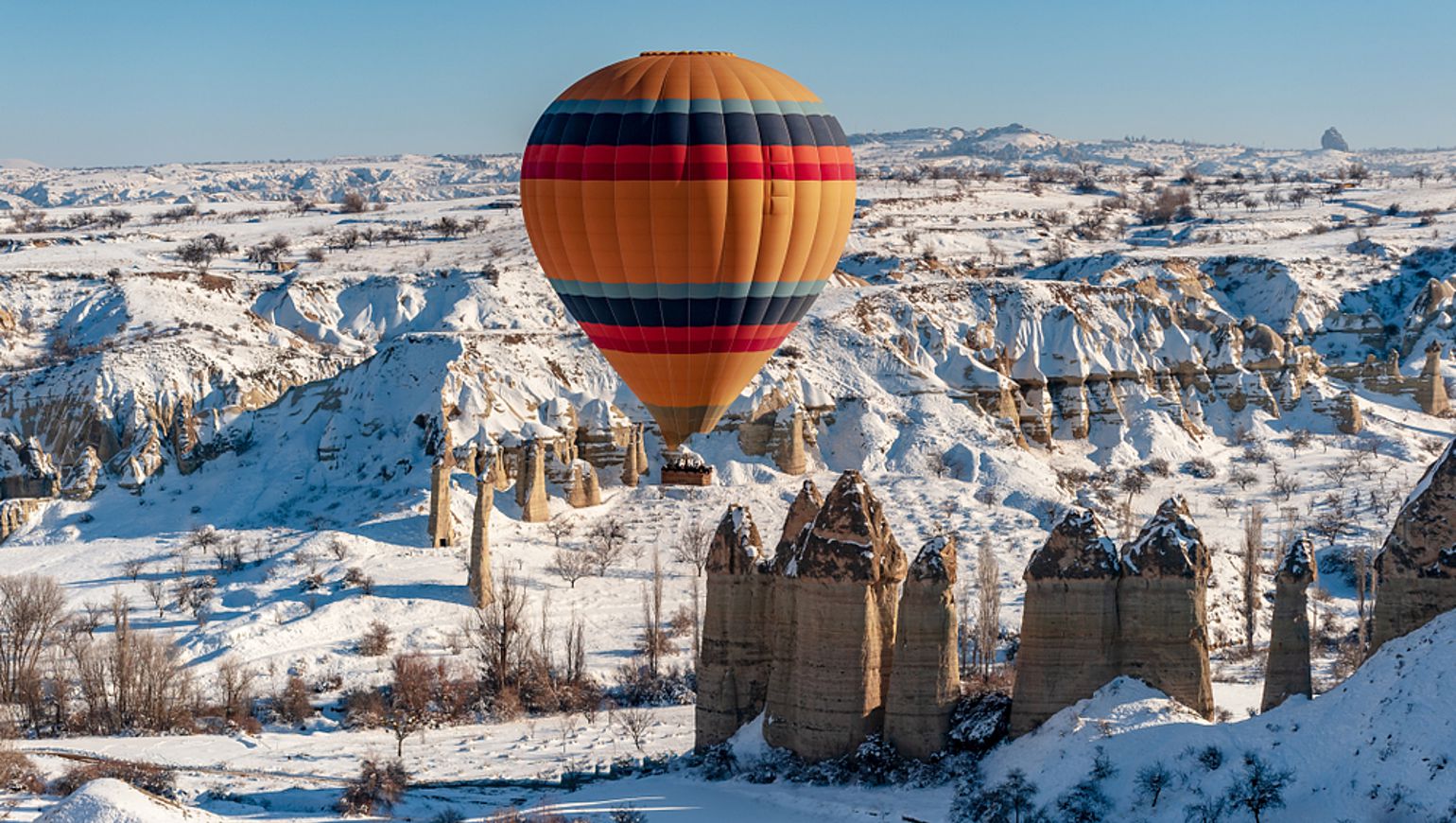 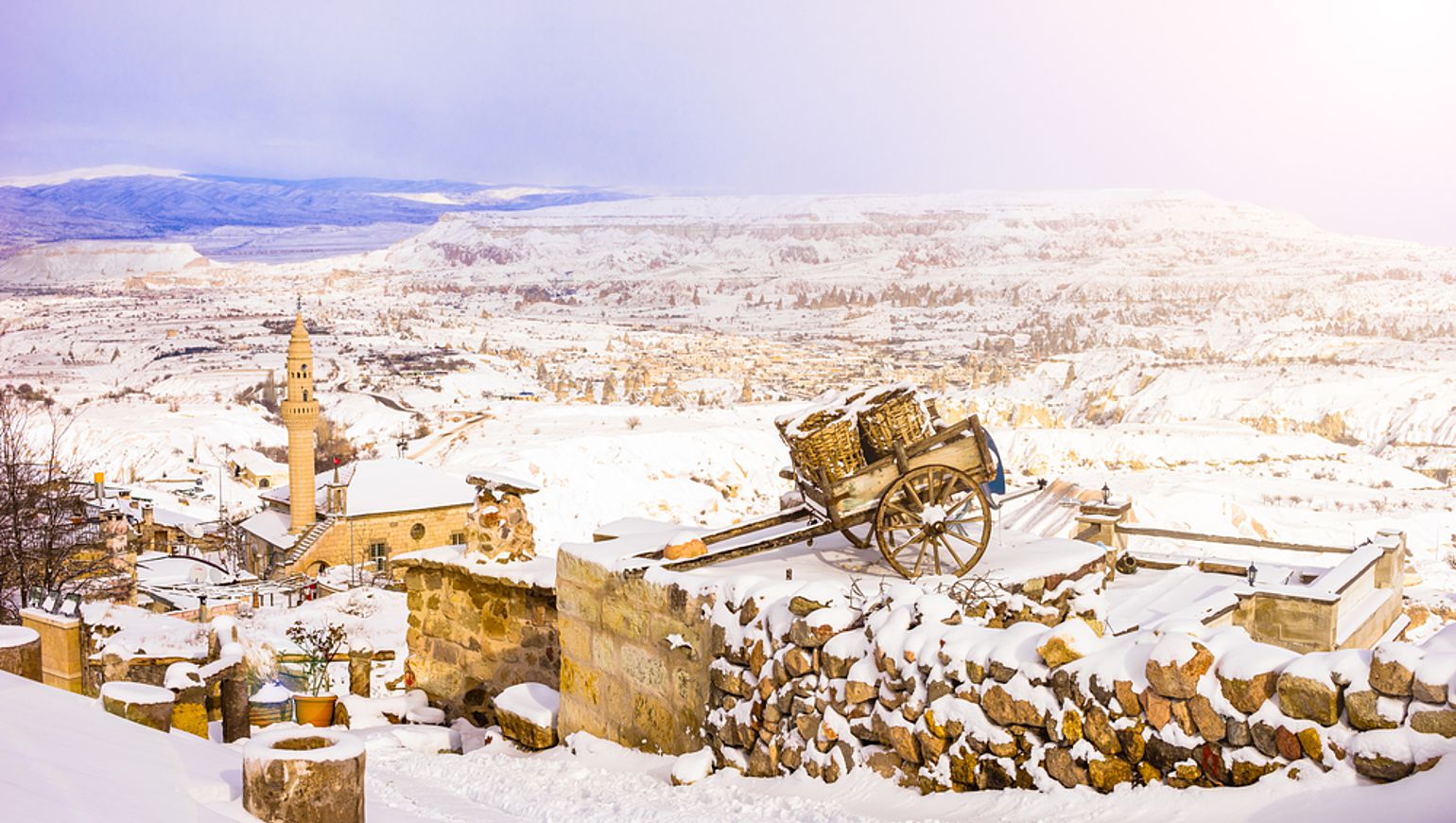 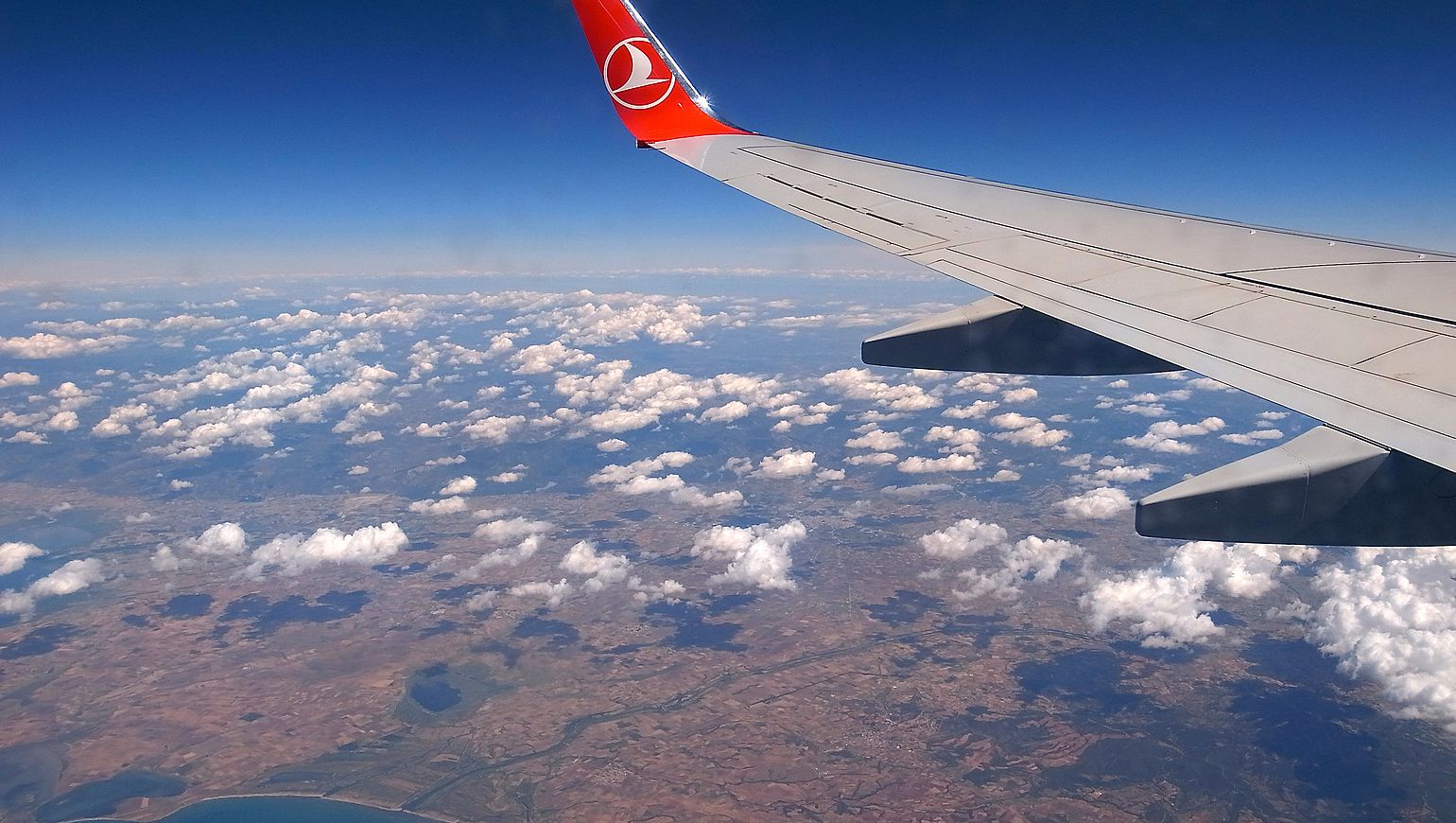 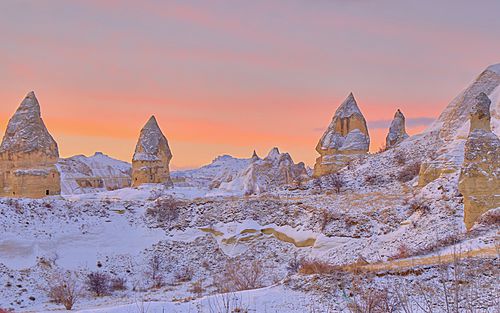 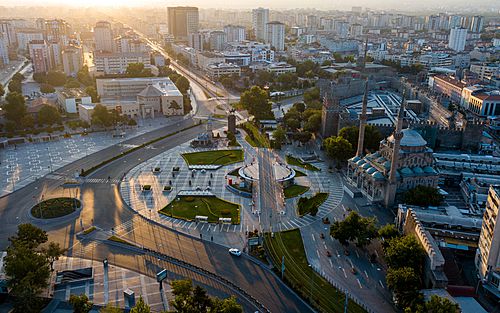 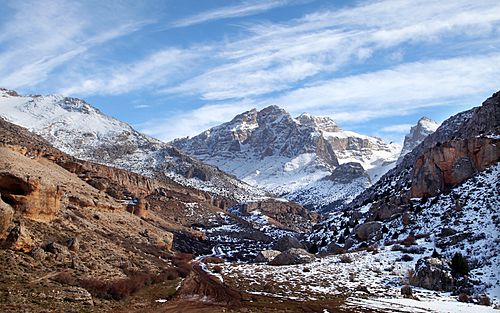 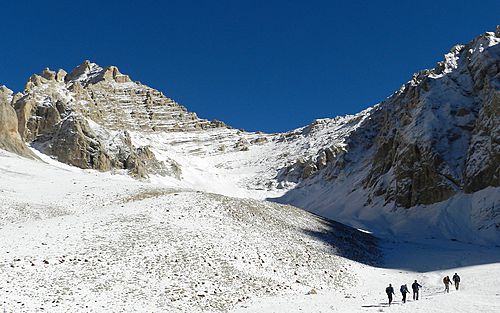 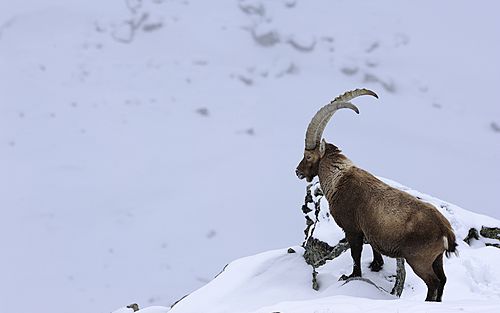 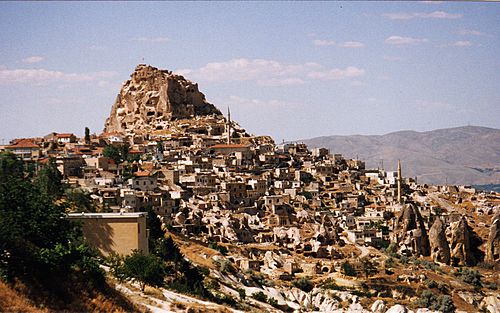 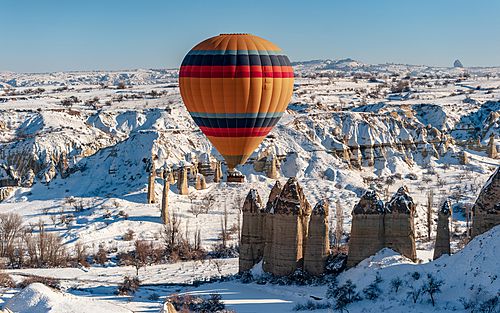 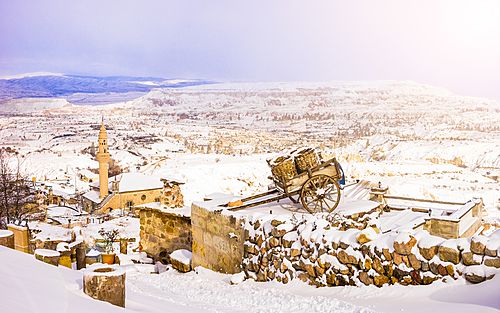 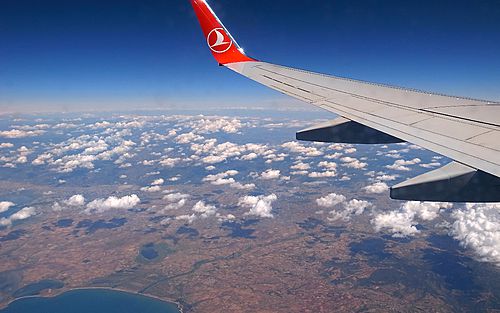 Snowshoes in Turkey! Take one of Earths most beautiful landscapes and historically rich cultures - now cover it in a blanket of fluffy snow! Then strap into a pair of snowshoes and discover this region taking some off-the-beaten-path trails! This trip includes impressive views, exploration of underground cities, some well-deserved time at a Turkish Bath and of course the most delicious food from t...

Snowshoes in Turkey! Take one of Earths most beautiful landscapes and historically rich cultures - now cover it in a blanket of fluffy snow! Then strap into a pair of snowshoes and discover this region taking some off-the-beaten-path trails! This trip includes impressive views, exploration of underground cities, some well-deserved time at a Turkish Bath and of course the most delicious food from the regions!

Customize this trip with Mehmet ’s local agency 3 reviews
Trip length
8 days
Prices starting from
$1,440
Per person
View price details
International flights
Not included
More information
Included services
Design your holiday
Due to high popularity, Mehmet ’s agency is currently unable to take new trip requests. This is to ensure the highest quality service for the travelers whose trips they are already planning. Please check back in a few days or take a look at the tour ideas of our other local agents in Turkey.
Add to Favorites
Tour itinerary includes
All tour ideas in Turkey (16)

Meet at the Kayseri airport with our company’s representative and drive to stunning Aladaglar mountain range, home to the highest peaks of the Taurus, famous for its gorgeous lakes, sheer rock walls, deeply cut valleys and canyons. Upon arrival you will be welcomed by our staff with tea, coffee and cookies. Your overnight accommodation is already prepared and you can directly move into your rooms, whilst your cook is making final touches for your first dinner in the mountains.

After breakfast, a short transfer takes us to Emli valley where we start our walk through a beautiful forested area towards Siyirmalik valley. After reaching the end of the valley, with beautiful views to Parmakkaya (finger rock), we will take time to have a break within beautiful mountain scenery surrounding us. Depending on snow conditions and time there will be the option to climb up to Eznevit plateau (2.540m) and walk from there back to Cukurbag village.  Or we will return on the same way back to the Emli valley where our vehicle is waiting for us and we drive back to our overnight accommodation.

Next to Demirkazik village we start our today’s walk and climb up to Arpalik plateau, a campsite inhabited by semi-nomadic families during summertime and with beautiful panoramic views to the Demirkazik Mountain (3.756m). From here we enter into Cimbar canyon with its 15 to 100 m wide and hundreds of meters high walls. The canyon leads us directly down to Demirkazik village where our vehicle is waiting for us.

In the late afternoon in Demirkazik/or Cukurbag village we will visit a local family for basic cooking workshop. We will have the opportunity to see the local lifestyle and watch their daily routines. After having a cup of Turkish tea, you will get a brief explanation of the dishes and their origins; you will cook for approximately 2 - 3 hours and then enjoy a relaxed dinner. You will be introduced to the ingredients typically used in local village cuisine and learn how to prepare and combine these in different ways; you will learn some basic cooking techniques and how to prepare a fantastic meal; all this in a fun and relaxed setting.

Day 4: Via Pinarbasi to Maden gorge

After breakfast, we start our walk next to Pinarbasi village. A very easy and gentle ascent permits us to Maden Gorge area where we follow old roads, used and built by chrome and iron miners in earlier times. The area is also famous for its ibexes, a species of wild mountain goat with long, curved horns, known as the undisputed master of terrifying heights, which come here during winter time because of the areas richness of food and vegetation.

On our way back we walk through an old river bed leading us back to Pinarbasi village where our vehicle is waiting for us. On our way back we take time for a break at the village’s local tea house and taste here a cup of traditional Turkish tea, known as cay.

After breakfast we leave the Aladaglar Mountains and drive to Cappadocia; on our way we visit the incredible underground city of Derinkuyu, opened to visitors in 1965. The city is approximately 85m deep, but only 10 % of the city can be visited, and contains all of the usual rooms found in an underground city, stables, cellars, storage rooms, refectories, churches and wineries. Apart from these, a large room with a barrel vaulted ceiling on the second floor served as a missionary school, the rooms to the left used as study rooms.

In Cappadocia, after check in at our overnight accommodation and some time to refresh, we first head out to visit Urgup, one of the most important centers in Cappadocia. Once this small village was a bishopric of the rock cut churches and monasteries found in the villages, valleys and towns around Urgup; today it is known for its famous wines and pleasant cafes. Here we take time to relax a while and taste a cup of traditional Turkish coffee before we explore the center of this famous place, with its small shops and pleasant cafes on our own way.

Optional activity: Hot air balloon rideIn the early morning before Sunrise it is optional possible to go on a Hot Air Balloon Flight. Cappadocia is awarded as one of the world's best balloon flight areas and it is one of the best ways to discover the unique landscapes of this impressive wonder of nature.

In the morning we go out to explore the Uzengi & Pancarlik valleys; we go for a ramble on a plateau offering a magnificent view on the Uzengi valley; then we enter into Pancarlik valley in order to see numerous cones and fairy chimneys decorating our path and also to visit the Kepez and Sarica churches for their architectural interest. Following our pathway we arrive in Ortahisar village; famous for its friendly inhabitants, picturesque stone houses, narrow streets and lovely churches as well as the castle like rock formation after which the town is named.

Afterwards we drive to nearby Goreme open air museum; one of the most beautiful valleys in Cappadocia. The Christian people at the heart of the Cappadocia realized that the soft rocks could be easily carved out to form houses, churches and monasteries. These Christian sanctuaries contain many examples of Byzantine art from the post iconoclastic period. The frescoes inside the Goreme open air museum are a unique artistic achievement from this period. Afterwards we continue our hike through Meskendir & Red valley area, another beautiful valley in Cappadocia with spectacular formations and colours; full with old cave houses, complexes and hidden churches from the old Christian civilization.

We conclude the day with a visit to fascinating three fairy chimneys of Uc Guzeller, one of the most famous natural beauties and symbols of Cappadocia.

Today we start our fascinating tour through Cappadocia with a visit to Uchisar village where we visit the high viewpoint known as “the fortress”. Many rooms hollowed out into the Rock, are connected to each other with stairs, tunnels and passages. The top of the Citadel provides a magnificent panorama of the surrounding area. After visiting the citadel we walk down to Akvadi, a famous valley following an old river bed, used today for vineyards. Especially a special section at the end of the valley is worth seeing.

In the early afternoon we arrive in Cavusin village, one of the oldest settlements in Cappadocia area; a small village made up of rock cut dwellings and elegantly carved stone houses. Our next visit takes to nearby Pasabaglari area (Monks valley). Pasabaglari fairy chimneys are unique and feature bizarre large toadstool like caps which protect the rest of the chimney from erosion. The area was formerly a monastic retreat and used to be known as monk’s valley and features a rock cut church dedicated to St Simeon.

In the late afternoon/early evening it is possible to visit a Turkish bath, known as Hamam or a pottery workshop in Avanos.

The traditional Turkish bath, better known as Hamam, combines the functionality and the structural elements of its predecessors in Anatolia, the Roman thermal and eastern Roman baths. In Turkish culture it stands for far more than getting a leisurely bath, it is a special place of relaxation designed to regenerate body and mind.

Pottery shaping studio (workshop) in Avanos: The most famous historical feature of Avanos, which is still relevant and very visible today, is its production of earthenware pottery; it is also the most economic activity in the town. The ceramic trade in this district and its countless pottery factories date right back to the Hittites and the ceramic clay from the red silt of the Kızılırmak has always been used. We will take time to visit one of the pottery studios and you will try to shape by your own.

After breakfast; transfer to Kayseri airport where the trip concludes.

Customize this trip with Mehmet ’s local agency 3 reviews
Trip length
8 days
Prices starting from
$1,440
Per person
View price details
International flights
Not included
More information
Included services
Start designing my trip
Due to high popularity, Mehmet ’s agency is currently unable to take new trip requests. This is to ensure the highest quality service for the travelers whose trips they are already planning. Please check back in a few days or take a look at the tour ideas of our other local agents in Turkey.
Add to Favorites 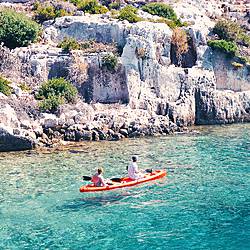 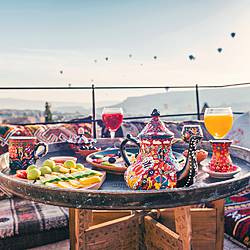