Sukhothai: immerse yourself in Thai history!

Located 440 kilometers to the north of Bangkok, the Sukothai Historic Park was the capital of Siam from the thirteenth to fifteenth centuries, and is an essential cultural landmark during a stay in Thailand.

Visit Sukhothai and go back in time

A visit to the Sukhothai Historic Park, which is listed as a World Heritage Site by UNESCO, provides an opportunity to immerse yourself in Thai history, and to discover the city of Sukhotai, the capital of the first First Kingdom of Siam, in all its former glory. Founded in 1232, the city retained its significance until the rise of Ayutthaya in the second half of the fifteenth century, which in turn became the focus of the country's political life. Sukhothai therefore gradually fell into ruin. Today, the superb remnants of the park bear witness to the city's golden age. During your visit, you'll have the chance to view elegant statutes of a walking Buddha in the typical Sukhothai style. 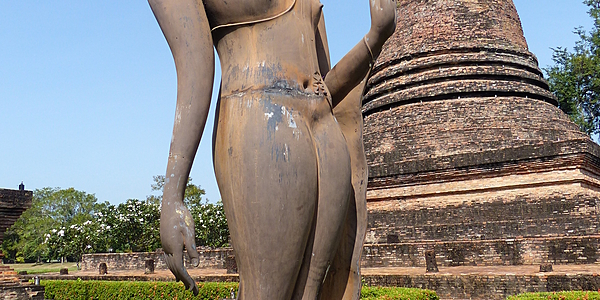 The best way to explore the park is by renting a bike, starting your visit in the early morning before the organized groups arrive. To get the most out of the site, I recommend that you stay in one of the nearby hotels, in Old Sukhothai itself, rather than in the city of Sukhothai twelve kilometers away, where there is little of interest.

Experience the magic of the Loy Krathong Festival in Sukhothai

Are you planning to visit Sukhothai during November? If so, don't miss the Loy Krathong Festival under any circumstances: this national holiday takes place each year on the night of the full moon during November. The purpose of the festival is to honor Phra Mae Kongkha, the goddess of the water, and to bring good luck.

The Thai people leave Krathongs, which are miniature boats made from banana leaves, decorated with flowers, candles and incense, in the water. They are often made in the shape of a lotus flower, a swan, or a stupa, which is a Buddhist mausoleum and place of contemplation. The festival has a particularly high profile in Sukhotai, with a spectacular show that tells the history of the country, with fireworks, and a religious ceremony at dawn that represents one of my fondest memories of Thailand, with events starting several days before the full moon. Consider reserving your hotel well in advance, as it is difficult to find somewhere to stay at the last minute during the festivities.

Live like Indiana Jones at Si Satchanalai and Kamphaeng Phet

If your taste for ruins has not been satisfied by a visit to Sukhothai, rest assured that there are plenty more stunning sites to be explored in the region. Around 50 kilometers north from Sukhothai (around 90 minutes by scooter) the site of Si Satchanalai welcomes visitors in search of a lost paradise against a lush green backdrop. Si Satchanalai was the second city of the kingdom of Siam in its golden age, and was important both politically and religiously. It was a trip off the beaten track where I felt like a real explorer.

You also have the option of visiting Kamphaeng Phet, 85 kilometers from Sukhothai, which was also an outpost of the ancient capital. Today, it plays host to a superb national museum and some lovely ruins. Unlike Si Satchanalai, which you can visit during a day trip from Sukhothai, I recommend that you spend then night at Kamphaeng Phet.