The other face of Negombo, between the lagoon and the canals

Negombo was the principal cinnamon producing town during Dutch colonialisation, and today it is a substantial seaside town which has made the most of tourism whilst preserving its advantages, its history and its traditions. Behind the big roads of hotels and the bustle of the Beach Road beaches, I discovered a peaceful colonial town with its canals and churches.

Along the whole west coast fishing is usually artisanal and done from wooden boats resembling catamaran, called oruwa. It was one of the first things I saw when I walked on the long beaches of Negombo. These impressive boats were everywhere on the sand and some of them are used in the afternoon to give tourists cruises.

Negombo has two fish markets, the biggest is right by the sea, not far from Dutch Fort. Watching the auction take place is an amazing experience. We stopped on the side of the road to watch it from a distance. The fish was laid out on the ground under the gaze of several dozen men who were shouting and waving a few rupees. You have to know how to bargain.

Cycling around the lagoon

A bike is the best way to discover the town and lagoon of Negombo. During my trip to Sri Lanka, I rented a bike in one of the many shops on Lewis Place and then set off to the centre of town. Chaotic traffic, a tourist in Bermuda shorts, a cacophony of horns, rows of three-wheeled taxis, shops and bar on every corner of the street. But once you get past the bridge on Mankuliya Road the atmosphere completely changes. Don't hesitate to leave the main road and get swallowed up by the tiny lanes along the lagoon. Now, the only things you pass are ridiculously charming little-coloured houses. The locals are amazed to see you there and turn round to say hello, or to laugh. I loved being there when the sun went down, admiring the hundreds of wooden boats moored on dodgy looking pontoons that looked ready to sink. 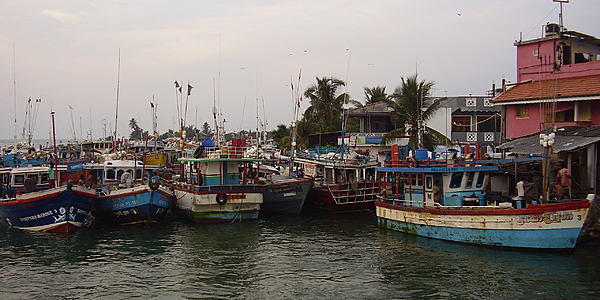 When the British arrived in the 19th century, the region of Negombo expanded significantly thanks to palm tree plantations. They were used for toddy and copra. The Sri Lankan upper middle classes moved to the area, leaving behind a heritage of luxurious colonial houses which you can still admire today.

Going south on the canal from Negombo you pass through wonderful countryside and can admire these old mansions. If you like travelling in nature then stop around the Muthujarawela wetlands. If you are more sporty then you can continue nearly as far as Colombo.