Vancouver, the city where life is good

Vancouver, which is one of Canada's three largest cities (behind Montreal and Toronto) is the ideal place to start or end a trip to North America.

THE city to discover in North America

During a trip across Canada don't expect to find the same kind of cities as you'd find in your home country, especially if you are originally from Europe! Given that the history of the North American continent is relatively short, the landmarks are very different and the cities are a million miles away from what seems familiar. In this respect, Vancouver is the perfect example of a Canadian city where life is good!

There's no chance of you going to Vancouver to experience its stunning architectural beauty! Though the downtown area does have a certain charm (albeit that it is nothing but skyscrapers), the rest of the city scarcely registers. There's nothing wrong with that though, it's essentially the same anywhere you go in North America. Nonetheless, it quickly becomes apparent that there is plenty of interest here: the variety of different ethnic neighbourhods (Chinese, Indian, Philippine, etc.), the way that the streets are so safe, and the variety of first-rate cultural attractions such as the Aquarium (one of the finest in the world), the various museums, or simply the range of malls where you can shop at (relatively) good prices.

It is hard to fall in love with Vancouver itself. Tourists passing through will appreciate its atmosphere, its quality of life, and the activities on offer, but may be less fond of the very "politically correct" attitude that seems to prevail in the city. 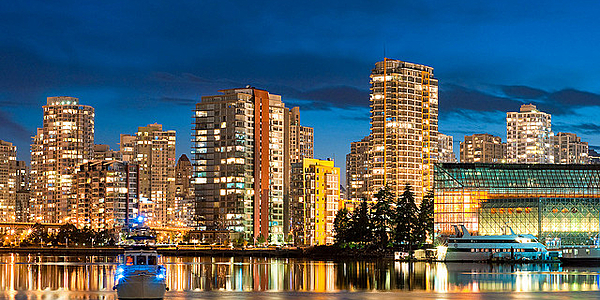 When the weekend kicks off, Vancouverites enjoy leaving the city behind and taking in the nature that surrounds the city. As such, they enjoy the fact that they don't have to go too far to get some fresh air.

In fact, the extraordinary Stanley Park is the lungs of the city of Vancouver. This large park is home to water rats and beavers as well as being an oasis in the heart of the city, where families go to spend the weekends, where athletes train and indeed, where something is going on at almost any time.

After finishing your walk (or even when you've just started it), there's nothing stopping you from taking the ferry and immersing yourself in the calm of North Vancouver, one of the satellite suburbs that surround the Downtown, with others including Richmond and Burnaby. You're not far from the mountains, and the air already seems purer, while a calmer atmosphere prevails.

Sports fanatics and lovers of outdoor activities, those who travel across Canada to burn off their excess energy and to explore, won't want to miss an opportunity to ski in the resorts in the surrounding area, especially when you realise that they are accessible by bus from the city.

Having lived in Vancouver, I retain fond memories of the city. Nonetheless, I recommend that you have a car (or at least some way of getting around other than public transport) to make the most of the city where life is good!